Look Closely for the Simple Pleasures in Summer

It’s the simple things that make Sea Ranch special. One of the great pleasures while staying at Sea Ranch is simply to get out and enjoy a walk along the trails.  Of course, there are the seals to enjoy at the point and the ocean’s majesty that changes daily with tides. Perhaps a family of deer may quietly graze among the grasses. Occasionally, a surprise squadron of pelicans will fly overhead in perfect formation. I guess that’s why they call a flock of pelicans a squadron. But I suggest the next time you are walking the trails, look closer at the simpler things along the trails.

Discover Native Flowers Along the Trails

Below are a few items discovered on my recent walk. As I looked closer, I realized how little I knew about them! With the help of the iNaturalist app, I not only learned about the little things along the way, but I also recorded their discovery in The Sea Ranch. I hope you enjoy them as much as I did. 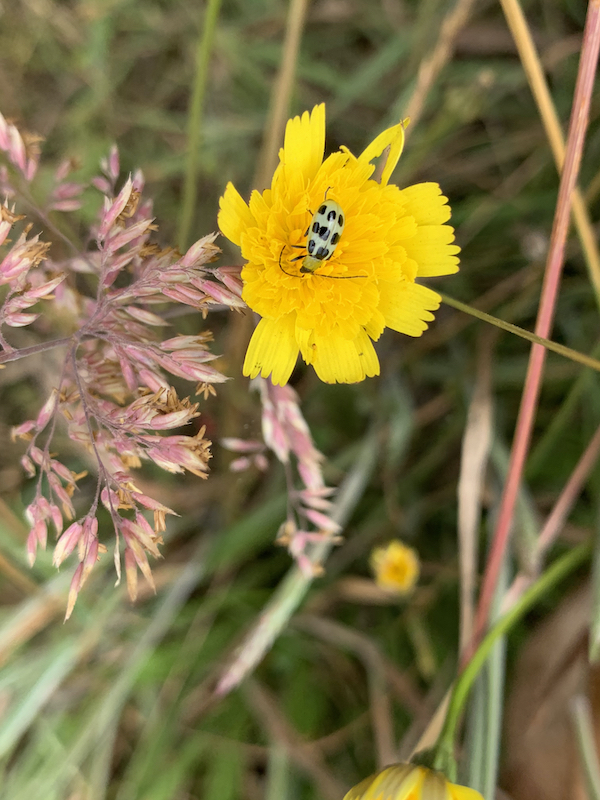 A favorite summer pleasure enjoyed by my grandchildren includes collecting this 6-legged cutie. Unfortunately, this species is a major agricultural pest in North America. Another name for the spotted cucumber beetle is southern corn rootworm. Many Diabrotica species cause damage to field crops, especially corn (Zea mays L.), making these beetles a major agricultural concern. Because the larvae live underground, these insects are hard and expensive to control. 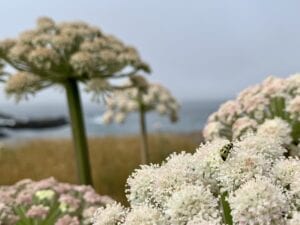 The grubs chew up the roots of cucumbers, beans, melons, squash, and pumpkins. In addition to these vegetables, they also feast on the roots of grasses including corn. Look for them in meadows, fields, farms, orchards, and backyard gardens.

Another perennial simple pleasure is also known as flatweed,  cat’s-ear, hairy cat’s ear, or false dandelion. Many consider it a nuisance or noxious weed. However, for others, they consider it a culinary or herbal treasure.  Culinary experts note all parts of the cat’s ear are edible. Furthermore, the plant provides high antioxidants, potassium, and lutein, just ask the Cucumber Beetle!

Early settlers brought it with them from Northern Europe because of its uses as food and medicine. Cat’s ears use include treating kidney problems, urinary tract infections, gall bladder issues, constipation, rheumatism, and liver problems. Its root contains natural cortisone.  Uses include treating allergies, rashes, and other itchy skin issues in both people and pets. In Greece and Japan, horticulturists grow cat’s ear as a garden green. The young, tender foliage eaten raw in salads or cooked in an array of local dishes. Some recommend you steam or sautée the flower stems and buds, like asparagus.  Or for more adventure, roast, and ground them into a coffee-like beverage.

Learn more about how to prepare Hypochaeris radicata: 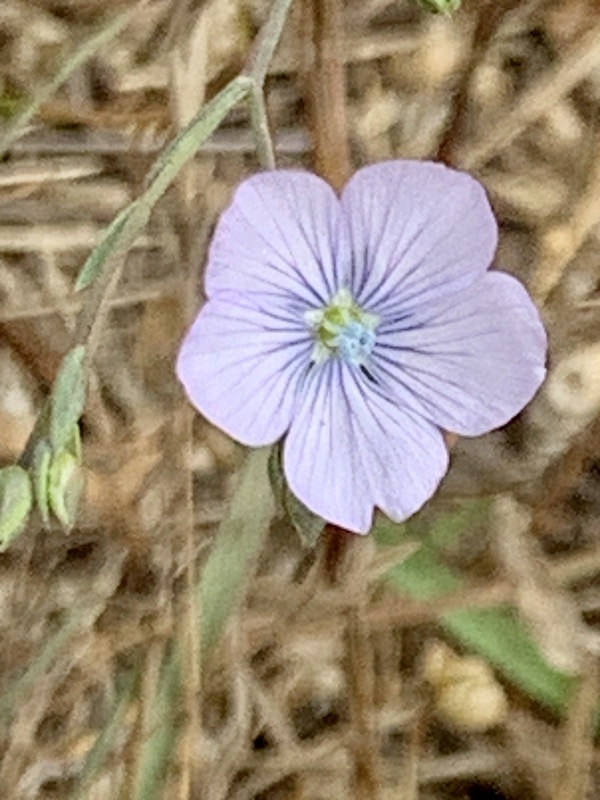 Summer flower Linum pratense is a slender, erect annual. It blooms in spring through early summer, producing lovely petite pale blue flowers. As the only blue-flowered Linum, L. pratense distinguishes itself from the occasional plant of L. bienne or L. usitatissimum by its lack of cilia on the inner sepals and its capitate stigmas. The delicate flowers range in color from pale blue or lavender to white, often veined in darker blue, with five petals 1–1.5 cm long.

Interestingly, a close relative of the meadow flax is  Linum lewisiim, named for Captain Meriwether Lewis of the famed Lewis and Clark expedition.

On July 18th, 1805, near the Great Falls of the Missouri Lewis recorded: “I have observed for several days a species of the flax growing in the river bottoms the leaf stem and pericarp of which resembles the common flax cultivated in the U’States. The stem rises to the hight of about 2 1/2 or 3 feet high; as many as 8 or ten of which proceeds from the same root. The root appears to be perennial”

Lewis collected seeds a month later. However, floods destroyed the original cache of seeds.  Doubtlessly he collected more.  Later Bernard McMahon (given seeds to grow from the expedition) reported to Thomas Jefferson that he succeeded in growing the new perennial flax. This blue flax was given the botanic name Linum lewisii a few years after Lewis’ death. 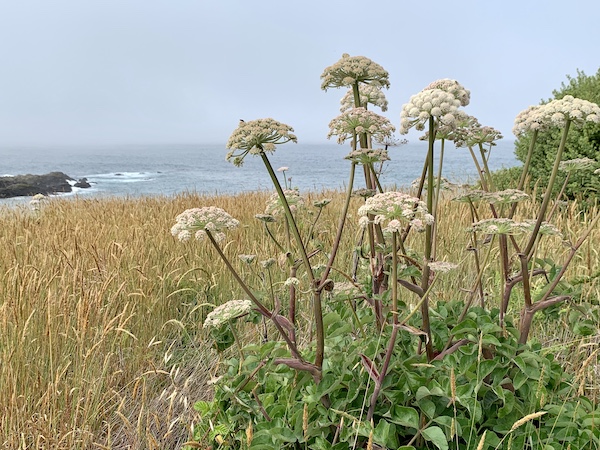 Angelica lucida is a species of angelica known by the common names seacoast angelica and sea-watch. As a member of the celery family, naturally many know it as wild celery. This plant is generally similar in appearance to other angelicas, with tall, dense umbels of yellowish-white flowers. Angelica grows most often along the coastline. Its distribution includes the east and west coasts of North America, plus parts of east Asia. Some eastern United States list the plant as an endangered species. The globe-shaped flower umbels and the height make Angelicas a striking border plant.

The stems are a traditional food and medicinal source for indigenous people on the coast who call it “wild celery”. Additionally, the Siberian Inuit have traditional uses for it as well, as a protective amulet and seasickness remedy.

According to “Health Benefits” the aromatic bitter tonic herb reduces blood pressure, relieves indigestion, stimulates the uterus, to say nothing of its anti-inflammatory properties. Ripe seeds, herb, and root are aperient, carminative, diuretic, emenagogue, galactagogue, nervine, stimulant and tonic. Tradition indicates wild celery to be useful in cases of hysteria, promoting restfulness and sleep and diffusing through the system a mild sustaining influence.

I so enjoy taking a moment in front of these elegant plants to capture their elegance against the sea’s backdrop. Watching the meadow grasses waving in tandem to their  stately blooms it differently ranks as one of my favorite simple pleasures. 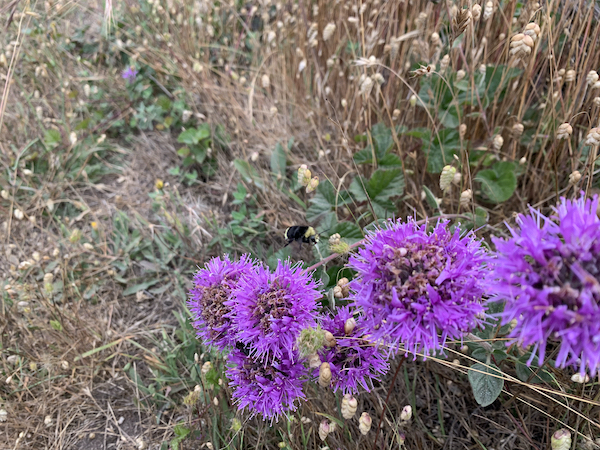 Monardella villosa is a subshrub in the Lamiaceae (Mint) family known by the common name Coyote Mint. Found only in California Coyote Mint grows in chaparral, coastal sage scrub, and various forest/woodland habitats. It produces rounded flower clusters of small, thready, bright lavender or pink flowers that are attractive to butterflies. Native American groups used this plant as a remedy for stomach upset, respiratory conditions, and sore throat. When steeped it makes a mint-flavored tea. This perennial herb forms a small bush or matted tangle of hairy mint-scented foliage.

Stop to Smell the Flowers and Enjoy Summer’s Simple Pleasures

Be sure you stop to smell flowers and enjoy summer’s simple things.  In fact, the perfume from my tiny bouquet of coyote mint picked along my trail walk inspired this blog post!  What simple things inspire you?

This site uses Akismet to reduce spam. Learn how your comment data is processed.